After returning home from Riga, early next morning we were packed up again and headed to the Mother country. As my parents become older and frailer I feel more and more guilty about the level of support my sister is having to provide as I live so far away. I haven't written much as its been fairly depressing stuff but we have been through 3 months of chaos and more chaos.


My mother was formally diagnosed with dementia 2 years ago, since December she has been in full time nursing home care, looking after her 24 hours a day 7 days a week has taken the most awful toll on my dad and after the weekend from hell and several weeks of broken sleep and her continuously rising levels of agitation and aggression she finally went into care. My mother as she is now is unrecognisable from my mum of a few years ago. Since going into care she has gone downhill even more rapidly but I think she seems to have plateaued and I hope she will stay at this level for a wee while.
It's been fairly grim and since she went into the home my dad has been very low in mood and really turned his face to the wall. He has ended up in hospital with repeated falls and a whopper of a chest infection. My sister and I have been frantic with worry, she became safe but isn't in the best place, he's become our worry and every time we phoned or visited we had the fear we wouldn't find him alive. He had hit rock bottom and was taken into hospital, just about everything wrong with him and the process of getting him back to his own self began, so after a few weeks in hospital and lots of new equipment, panic buttons, falls alarms and the like he has come home again.

So we head up for a few days so we are there whilst he comes out of hospital, he doesn't want to come and stay with me so back up the M6 I go, I am getting a dab hand at Glasgow hotels now, this time we stayed at GoGlasgow urban hotel due to its proximity to the hospital, loved the decor, breakfast and staff superb, owned by a family company who give 50% of their profits to local charities, they also give you a Tunnocks tea cake in the room, I was mightily pleased by that, himself was very enamoured of the retro style phone although he did not eat it. 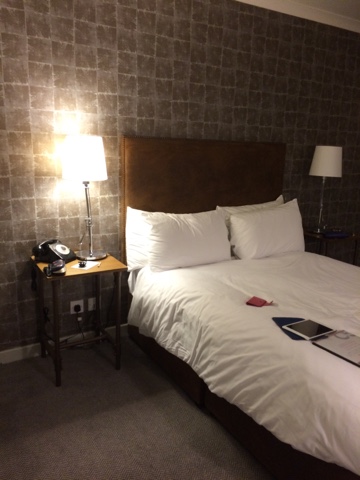 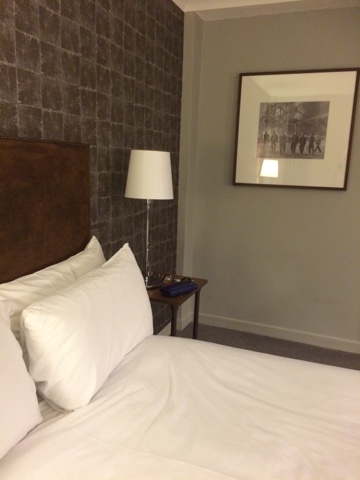 We then had a very welcome complimentary night at One Devonshire Gardens, himself had mentioned to staff that we hadn't slept well on our previous anniversary stay, steady yourselves now, due to the bed. Being the all round excellent hotel they are they offered us a free night and as we spend lots of time in Glasgow  we were very pleased to accept. They gave us quite a swish room too, completely different in style to GoGlasgow Urban but lovely none the less. The bath in the bedroom thing is is quite a few of their rooms, we had that previously when we stayed in the Vettriano suite. 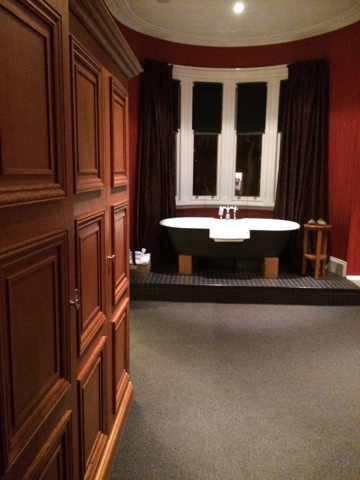 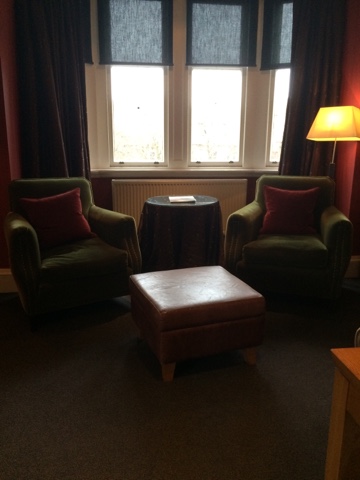 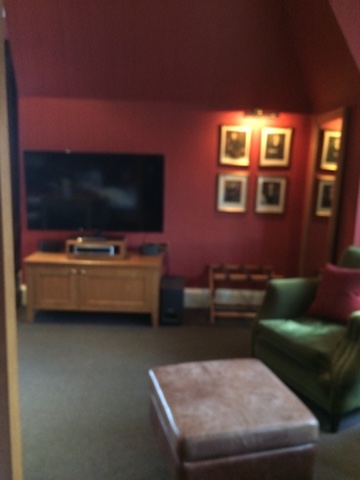 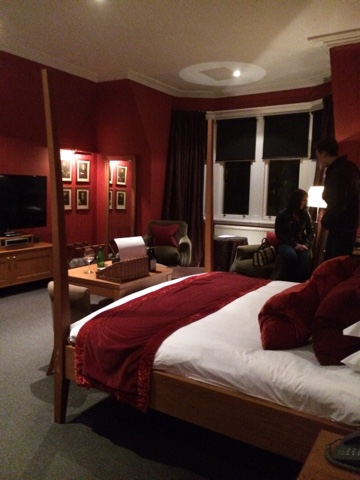 The service in both was top notch, I loved the decor in GoGlasgow and as its at least £100  cheaper per night, I guess I will be staying there lots but because One Devonshire is where we got married if I have the cash I will be happy to go there at least on our anniversary. Go and stay in either, they're both brilliant hotels.

My dad is now home and has become fixated on the idea of my mums funeral, God love him, last few weeks you wouldn't have got good odds on it being him but there you go. It's become a thing he has to get fixed, so we sort it out, we have found the paperwork for the cemetery lair my mums parents are buried in, we also have a spare slot in the lair her aunt and uncle are buried in, were that kind of family, 2 plot kind of toffs, that's us. We have bought a funeral bond and chosen hymns, it's been a bit surreal but my mum is completely unaware of it all.
I was with her just 5 weeks ago and on this visit I'm not convinced she recognised me when I went in. She was less well kempt than I would have liked to see her and they seem to have given up putting her damned teeth in which is my big pet peeve, they had been lost for weeks but turned up in my mums handbag, also lost in one of the staff lockers, the mind boggles.. Despite looking like Draculas granny she has managed to acquire an amour, she was sitting holding his hand when I arrived, I had been pre warned by my sister about this man , who coincidentally has the same name as my dad, I guess she just shouted out 'Jim' and this wee man answered, he seems happy enough with it so I guess I am pleased she's found a pal. Hopefully it'll stop her kleptomania, this visit she had someone else's teddy bear, handbag and the photo frame on her bedside table was of people she was sure were her family, I have a very nice looking younger brother and a cute wee niece I am completely unaware of. Still, I'm not having to buy presents for them or babysit. Every cloud and all that.

That's so sad about your mum and also your dad. It's hard to see them slip away like that.

Oh God Auntie, isn't it awful when our family member get like this. My family didn't, but my husband's Dad has Alzheimer and my wonderful Mother-in-law almost killed herself trying to take care of him. He was finally put in a home and my oldest Brother-in-law gave her hell for this though he had done nothing to help. Well, what goes around comes around. My Brother-in-law was diagnosed with Dementia and was put in a nursing home in November, he died in January.
It's so hard, particularly long distance. We live in Georgia and my husband's family is in California, nearly 3000 miles away.
Well at least you got a nice hotel break.

Oh Gwen...it's so hard to have our parents age, fall ill and care for them. I'm so sorry you and your family are having to go through this. Sending lots of hugs and wine.

That is so sad to see your parents go downhill like that and, in your mum's case, not recognise you. Hoping your Dad bounces back soon. Maybe he was aware he was death's door himself and wanted to get the practicalities of your mum's funeral sorted in case he was not around to deal with it. Must be so hard for you, though.

LRH - in some ways its harder than her being dead, awful hard stuff

M&J - you hear that all the time, this kind of stuff really divides families. fortunately my sister and I are still good, hopefully always so

Addy - I'm sure you're right, he was hell bent on getting it done but my sister and I knew what they wanted so it would have been okay but he'll be happier for a while knowing its sorted.

Libs - thanks my dear, sending them back, I am trying not to think of what they could be spending their money on instead and I am trying very hard not to blog about what £40 k a year in a nursing home actually looks like, in case I make you all afeared. There is so much not written, I shall come and tell you this in person, with gin, with a big lot of gin xxxx

Gigi - thank you, bloomin hard all round, I can t even begin to write of how I think our old folk are cared for, I'd probably get arrested!!!!

Pop in every now and then....just to check on you :)
Seems you've been having quite a time of it my friend.
Having lost both my Mum and my Dad now I am so relieved I don't have any of this worry. But my new Mother in Law (a lady I have know and loved since I was 14 years old) has finally gone into a nursing home (Parkinsons and related dementia)
We haven't got to the bit where she forgets who we are yet, but I draw upon a blog you wrote about your Mum's dementia quite a while ago. The gentle reminiscences, not reminding. The guiding, not correcting. I've thought of you often.
Sending love x

Vr hello my love X sad to hear about your ma in law x I hope she's being looked after well, remember I'm around for advice, neurological disorders are my thing xx

hi Auntie G, have just popped by to see how you are getting on as its been awhile, and what a while its been for you. Always written with good humour, it can be a great veil cant it? Tough times so thinking of you. and one Devonshire Gardens

Thanks Mrs W X glad you popped by x