When I met mr auntiegwen/adventureshe drove a Volvo estate and seemed completely uninterested in cars. I liked that plenty fine, I am also completely uninterested in cars, if they take me where I want to go and I can park them easily that'll do me. I was completely lulled into a false sense of security on this issue.
It transpires that having me and the 3 beautiful children plus the boy wonder, the one he made earlier just took up a lot of time and we had a bit of a honeymoon phase. As the children have grown and needed less input mr auntiegwen/adventures has had a bit more time. This spare time is mainly taken up by the fire service but in the 3 and a half minutes a fortnight he has off he started looking at motorbikes. He had them before he met me but clearly felt being married to me wasn't enough of an extreme sport and needed some more adventure in his life.
He has plans for big long trips on motorbikes, the most wacky of which is buying a Ural motorbike and a sidecar for me and travelling from Alaska to Argentina, when we start I will be in a parka and when we finish I will be in my pants.

He has now moved on to looking at VW camper vans.

If there is anyone out there in the internets still reading hello to you. All is well here chez auntiegwen, clearly I am much older and hopefully wiser but all is well.
All 3 of the beautiful children are grown up and living independently now, Beautiful Baby Daughter graduated a few weeks ago, Eldest Beautiful Daughter gets married at Christmas and The Beautiful Son has a beautiful baby daughter of his own.
Mr auntiegwen or adventuresinrealityblog and I continue to be the happiest of happy, we live on our own in a far too big but extremely clean and tidy house. He continues to consult and try and tame the madness of engineers (although he has crossed from their numbers over to the dark side) but he has also become a part time firefighter- at one point he was the oldest trainee firefighter in the county and my guess also the country but he's now the oldest firefighter in his station by miles.
I have a new job to start in a few weeks and am excited about it, after 8 years in my last role I wanted and needed a change.
We have been busy on our travels and hope to do some more, photo of a sunset taken on Christmas Day 2017 on the beach in Tel Aviv.
Hoping you and yours are well x 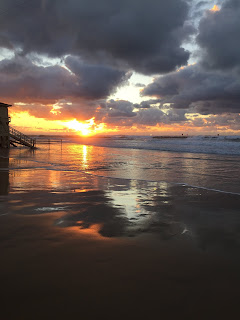