And that, my friends, was August

work, laundry, shopping (of the supermarket variety, not the nice ladies things variety), try to stop kids from killing each other, try not to kill the kids myself, eat ever such a lot less but still not lose weight, be very very tired, repeat to fade.

And in other news...

I gave up ironing, doing everyone's ironing on a Sunday night made me feel like I did when I was a kid, doing my homework at the last minute, so I gave up, we are embracing the casually dishevelled look. The beautiful children are not best pleased, they're not arsed enough to do it themselves but they are great big glowering and sulking masses of crumpled Jack Willsness.

I had a birthday which made me old and a trip to the Isle of Wight where it appeared to be 1977 in the place I was in, I adored it, I wanted to buy a flat in Sandown but wasn't allowed, meaners. I actually saw the shop windows of my childhood with dresses hung from the ceiling with fishing wire, and cardigans fanned out on the base of the window and a wee note attached saying "Lovely on"

That was the nice bit, oh I got a Kindle too and other nice lady things such as perfume and flowers and some strange assortment of presents which make me think - have they met me?

My son, the 6 foot 2 lump of useless, let his friend Henry try and burn a smiley face onto his arm with a lighter which has still not healed 3 weeks later. You probably heard me, he got full fat cross shouty shreikeyness, stupid stupid boy. This is a child who actually possesses qualifications and now has a hole in his arm, again (in capitals for emphasis) STUPID STUPID BOY AND I DON'T FECKIN CARE HOW MANY FECKIN GCSE'S YOU GOT, YOU ARE A STUPID STUPID BOY. I am still cross about this, I will still be cross at Christmas most probably.

I have spent masses of time in hospitals recently both work and not work and I have turned into the visitor/relative I used to hate. The one who says "I used to be a nurse you know" and follows it up with "in my day" I hate myself for it but I'm not madly impressed. I am not even satisfied.

I have a new car, it is temporary until my company car arrives, it is a Renault Megane, it has an internal sat nav and a strange radio. Both of which defeat me on a daily basis. I am now officially my mother.

And speaking of my mother, she has been on a diet, a very successful one. In truth she is existing on black tea, water and porridge, as my dad says she is the only geriatric anorexic in Glasgow. She has no other conversation except how many pounds she's lost, she tells my sister and I, a lot. A big lot. We are fed up being told how easy it is to lose weight if you just don't eat. We were kind enough not to mention that she's been no stranger to a fish supper for the last few decades so we wish her to stop weighing us with her eyes and shut the feck up.

So if you've read to the bottom I apologise for not putting in a "Middle aged woman ranting" alert, but thanks for reading and a big thanks to those of you who texted, emailed and commented wondering where I'd been.

So, what have you lot been up to?

Labels: being tired, feck I've a lot of labels about being tired, Middle aged., rantie auntie, tired, turning into your mother

In which I make myself laugh, a lot

I have loads of faults, truly I could do a daily post of what is wrong with me and you'd still be reading at Christmas. One of my less endearing traits is my insistence on thinking I'm funny, genuinely I think I am hysterical. And I laugh at my own jokes, a lot.

On Monday, I was visiting my best friends dad, lovely bloke he is and he's reading a book about World War 2.

"Are you enjoying your book?" I asked him in a very polite tone and his reply of
"I've just started it" quickly followed up with "would you like to borrow it" in a slightly hopeful tone made me think not. And before I could stop myself, I hear these words coming out of my mouth " no thanks, I know how it ends"

and then I collapsed in hoots of laughter, and I'm still laughing about it now.

Aw, you had to be there

This morning as I waited for the kettle to boil, I noticed that the chopping board was in the wrong place, oh yes Miss Marple has nothing on me, even before coffee. As I moved the board, there was a sheet of paper addressed to me covering this. Ladies and gentlemen, I give you exhibit A - the crime, a very peculiar stain upon my white worktop. 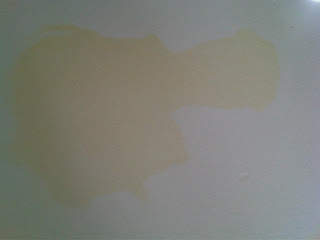 Exhibit B - the confession 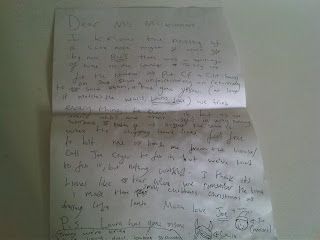 The bit you can't read at the end is a list of things they've tried...
fairy liquid, dettol, baking powder, flash, cif, cilit bang and water

I do love Joe, yes, this is the same Joe who had the party in which his mother's and his dead great granny's wedding china got broken but he does dress up as Santa when I need one for my parenting skills group's Christmas party, he must get kudos for that.

And when he refers to the cute note, he means this, exhibit C - 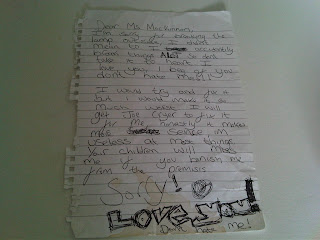 the sorry note (which I kept as he made me hoot with laughter) when he broke my outside light and indeed it was fixed by Joe Cryor.

So, when people tell you children get less messy and break less stuff as they get older, and you're thinking that you, one day, in the fullness of time, can have a lovely home stuffed to the gunnels with White Company and Cath Kidston, don't bank on it before they're 36 or so.
Posted by auntiegwen at 07:34 17 comments:

Eldest Beautiful Daughter and her friends Poonam and Joe were quite confused when they saw, what they described as "a small Asian woman" walk up the path and let herself in the front door.

I am back and extremely tanned following my trip to Turkey, I am like an Cadbury's creme egg in human form, small, round and brown.

The house and EBD have survived, my Bombay Sapphire has taken quite a hit and you can still see the outline of Joe's vomit on the front doorstep but compared to Joe's mums return and finding the breakage of both her and her beloved deceased grandmas wedding china, I think I've got off quite lightly.
Posted by auntiegwen at 09:08 11 comments: