I met one of my students the day after and she was extremely puzzled as to why I looked so different - this is what a night of no sleep and 5 little girls intermittently fighting and crying does for you. Touche eclat and Beauty Flash Balm don't even make a feckin dent in it.

We had the full gamut of emotions, missing mummies, so and so doesn't like me, I want my own way itis, scary storytelling followed by a severe dose of the frights, 2 headaches needing calpol and a nose bleed !!! helped along by fizzy pop, truckloads of e numbers disguised as sweeties and a slight sprinkling of mischief as they weren't in their own houses.

Eldest Beautiful Daughter disappeared at the crack of sparrows in case she was asked to help in any way, shape or form, The Beautiful Son hightailed it to his mates to watch the Rugby Cup Final where he endeared himself to the parents by cheering on the Springboks (you can take the boy out of Scotland but you can't take Scotland out of the boy) and this left me...ALL ON MY OWN

Pre pubescent girls can be feral like creatures and this lot weren't too far off the spitting and snarling at each other. There's always 1 wee scone who is liked less than the others and there's nothing like a group of girls to find your achilles heel and put the boot in.

As a mummy who has already had birthday sleepovers for her other daughter I knew this would happen and I kept telling BBD that these sleepovers were better in the planning and the anticipation than in the actuality, that they would all fall out and somebody would want their mum and it really would be a disappointment. She was having none of it, her friends were different, they were all really nice to each other and way more mature the EBD s mates were at that age. As I've blogged before the BBD is always right, top barristers have to practice their debating skills with her, it's an integral part of their training. So the damn thing was arranged for the night of her birthday or Black Saturday as it's now known.

It really was hellish, and I'm an old hand at this and it was still hellish. I had to take 5 little girls out in their pyjamas and dressing gowns to collect TBS after the rugby as they were too scared to be left alone for 5 mins, I had to phone 3 separate mummies for permission for calpol, a reassuring chat with their daughter and to tell them of the fairly spectacular nose bleed repectively. 1 girl was sick and we had another who locked themselves in the loo. All this in between eating, drinking fizzy pop, singing very loudly to that feckin awful umberella song which has wedged itself into my addled brain. At no point was there much of the sleeping.

The next day when they's all gone home I asked BBD if she'd really enjoyed it and as she can never ever be wrong, she was very enthusiaistic about how it had been great. As I can be the bigger person, at no point did I let dab about the text she'd sent to The Beautiful Man which he then forwarded to me

Sleepover not going 2 well but i an co ping
Posted by auntiegwen at 17:19 5 comments: 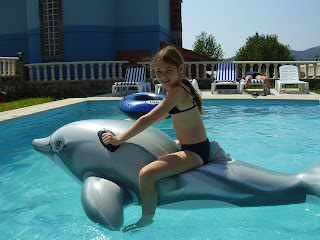 Yesterday was Beautiful Baby Daughters 11th birthday. As I held her in my arms for the first time I loved her so intently and with a tiny tinge of sadness, knowing that she was the last baby I would ever have.

She has grown into the most complex of my children, a creature of extremes - at times as wild as the heather mixed with the most gentle and tender of hearts. Sometimes seemingly so grown up but remaining as much of a baby as she ever was. I feel she is the most like me, both physically and emotionally. I see all my faults glaring back at me and this can make for fireworks between us but it in no way diminishes the deep and profound love I have for her.

She is incredibly enthusiastic about things and has the biggest heart. She is always telling people how much she loves them and will often write little love letters to us or give us certificates praising us for our good points. Her generosity of spirit is fabulous. She is definitely the most creative of us all and life with her in it is never boring.

I still sneak in and look at her when she is sleeping and as I see the glorious mop of titian curls slightly damp from the bath covering the still babyish curve of her cheek and the thumb remaining very firmly in her mouth, I can still see the baby in the cot.

I love her so very much and she is still now, and always will be, her mummys darling baby girl, and my heart, mo chridhe
Posted by auntiegwen at 14:31 4 comments:

Procrastination, thy name is Gwen

As I sit here, fiddling away at the computer and eating hobnobs (which incidentally aren't as nice as I thought) I know I really should be running. It's really cold outside though and I have to catch up on all my lovely bloggy friends weekends etc, etc.

I know I should be running, when I get out I do really enjoy it but it's just the getting out that's the problem, I am becoming shockingly lazy and consequently lardy. I am really content at the moment so I'm not off my food, I have started eating chocolate again, which I had given up for nearly 2 years. On Saturday I ate a whole portion of profiteroles, a whole portion, me who hasn't cleaned her plate in years - ask the Edge ( my best male matey boy) he only eats with me because he gets to eat all his pizza and then at least half of mine. I am just completely unmotivated to run.

I thought that being with The Beautiful Man would make me more inclined to exercise as he is very sporty and competes in triathalons. Himself is incredibly focused and trains as much as time allows him to and there's nothing like having to get your kit off for a man who has not 1 spare ounce of flesh on him to make the vain part of me want to stay in reasonable shape.

But still I procrastinate, I have a gym membership and like all normal people I never go. I was bought a little pink ipod for my birthday so I can be entertained, still can't be arsed. I have now bought good proper running shoes, they're not even dirty. I didn't run at all last week and as I sit here on the only day of the week that I don't have to officially go to work ( I am meant to be working from home, which really means sitting here in my jammies eating hobnobs and messing about on the computer) and I don't have to take care of any children I am still not out there running.

I started off with, I'll just check my emails till the washings done and I can peg it out, then I read my regular round of blogs, then the washing still wasn't done, so I did this and now the washing's finished so I have to peg it out and then go.

Glory be, there is a God, it's just starting to rain and everyone knows I wouldn't lace my trainers up if there's a spit of rain around, aw well back to the hobnobs.
Posted by auntiegwen at 10:27 6 comments:

Labels: no will power, procrastination, running 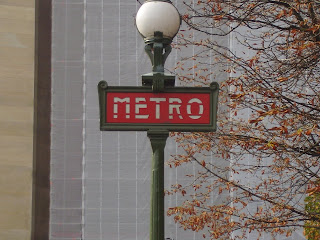 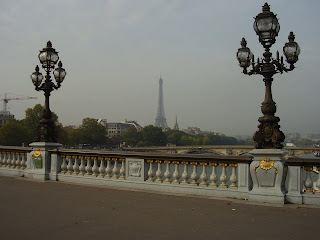 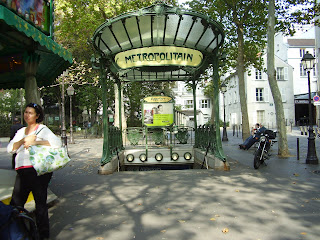 Well, I did come back, I didn't really want to but I did. I absolutely love Paris. Highlights of this trip were many but I really enjoyed using the metro, which I didn't do last time and I loved Abbesses metro station , it's only one of 2 original Guimard Art Noveau metro s that remain so I was really pleased to see it.
I enjoyed wandering round Montmartre, I went to pray in Sacre Couer (lapsed Catholic that I am) and although the Church is really impressive, inside I was left feeling slightly uneasy at the juxtaposition of the sanctity of the church with the requests for money at every turn. Signs reminding you to respect the church by not taking photos and not talking ( which I completely understand) vying for position with signs asking you to donate 10 euros to light a candle and 2 euros for a tealight, donations of 15 euros for masses said and the uneasy spectacle of a gift shop within the church itself, just off the right aisle. I understand that it costs to upkeep the church, but isn't the Catholic Church the richest institution in the world ?
I loved the old style Paris with the beautiful traditional architecture and I was surprised at how much I liked the very modern style at La Defense in west Paris. I could quite happily live there.
So I'm home now and back with a bump, got up at 5 to fly back in time to teach my year 13 s. Went straight to work where a visit from EBD food tech teacher to discuss her lack of progress in handing in course work was awaiting me. After school, lesson prep for tomorrow then home, where I had to take TBS to his electric guitar lesson, assemble a costume for BBD 's book character day and then cook tea and deliver TBS and his maddest mate to rugby training. In between the normal cleaning, laundry, mummy type stuff I do.
Was it only last night The Beautiful Man and I were strolling hand in hand along the Champs -Elysees ?
Posted by auntiegwen at 18:41 7 comments:

Things you should never say

Me to my group of trainee nursery nurses


Me to Eldest Beautiful Daughter

Yeah, I'll drive you to David's on Fri night ( I ended up doing 2 trips as I couldn't fit all The Matey Boys in the car and spent from 6pm till 7.40 pm in my car)


The Beautiful Man to me, when looking at old photographs of me

God, you used to be a big old bird, didn't you ? Did Gordon have to open the double doors for you ?


The Beautiful Mans mother to me

It's not that it's not lovely to meet you Gwen, but it's just so strange that you're not Caroline


Beautiful Baby Daughter to me, in the car with all 3 beautiful children and The Beautiful Man driving at speed

If you get married again, can I be your bridesmaid ?

To his credit, he didn't crash
Posted by auntiegwen at 08:47 4 comments: