The Beautiful Son says no 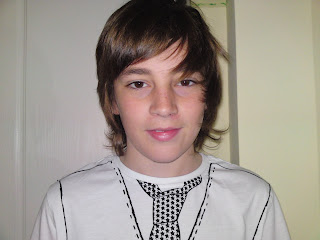 I've put up a picture of my very cool dude with his long hair as it won't be long before he has his annual haircut, yep, that's right, at the beginning of the school summer holidays he gets shorn like a sheep, none of us want him to, he's gorgeous with his long hair but his choice.


It has been a strange month chez auntiegwen. No one's relationships have been running smoothly and the tension and tears have been omnipresent. Feel very sorry for my poor boy living with 3 hormonal females !!

The Beautiful Son is very popular with the local young ladies, he's funny and kind and used to talking to girls. He has no girlfriend, he has no want of a girlfriend and even though he's asked out regularly he's just not interested yet. He is in his last year at middle school and there is a leavers prom, now this is a big deal for lots of kids. Would my son be interested ? That would be a big fat no, he's not going. Is my son being asked right, left and centre to accompany some very nice young girls ? That would be a yes.

So my son has to keep saying no to people and some of them have cried, some have texted him constantly and girl A's mates berated him for "talking to other girls" and making girl A cry ! His every movement is being watched via cyberspace and real life.

He came in the other day and said to his sisters and I "No wonder none of you girls can get a boyfriend, you're all bloody mental !"

What advice can I offer him ? None, it'll probably only get worse.
Posted by auntiegwen at 11:18

Oh boy he's going to break a lot of hearts that one!

He is growing up so much, Gwennie... And I agree, he will break some hearts, but he seems very sensitive, and that is such a lovely quality in him...

They are so young to be pairing up, non? Such things seem so important at that age, and older, as in your DDs' cases... I hope the stars align for all of you in the future, and that relationships do improve x

He won't know what he's missing until he doesn't have it...

Oh bless that gorgeous boy!
Good for him taking his time though. At least you don't have *that* to worry about too huh?
Squeezy hugs for you and the beautiful children xx

All of your kids seem so fab and down to earth. You can tell they have a great mum.

Poor lad! It all sounds a bit intense, doesn't it? Whatever is going on, these days? Of course, we had 'crushes', when I was at school, but it was all quite low key, compared with what seems to go on, now. Hope the fuss dies down soon! It'll be different when he's 'interested', of course.

the curse of being EBS - what a cutie, he may well change his mind about the big dance tho!

It is a shame to cut the hair. He's obviously a very popular young man and with a face like hes got, I'm not surprised!

It probably wasn't not having a girlfriend that got to me, but not having the choice not to have one.

Makes me very glad to have only girls! And no, they don't chase boys like some moronic females do.

The boy will be a heart breaker.... and with a killer line to boot. LOL at what he said to his sisters!

You're going to have one lucky and happy daughter-in-law. Keep up the good work :) TFX

Fhina - yep, they are so young and he truly has girls walking up and down outside the house just to see him ! As for the rest of us, well we have each other and that's a lot more than others do, so I'm grateful for it.

Penelope - yep, I am glad because I know that when it happens he's such a big softie that takes things to heart, he'll either be fantastically happy or be played but beware the girl that messes him, she'll have me and his sisters to deal with, the 3 witches in Macbeth springing to your mind too ? xx squeezy hugs back xx

Lolly - they are fab, but because of them, I just drive them places and love them

MM - it really does seem that at his school the girls are the ones doing the chasing and they are very upfront, no shrinking violets there !!!

Sue - def not, I think he's scared, feels it's safest to stay at home, that's been his excuse for turning them all down, that's he's not going.

Tim - I did, and I'm sure if he found a rugby loving, how much can you eat, electric guitar playing girl that felt like his pal, he would be more interested

Katie - some of them certainly are

CJ - I think it's because he's kind, he never tries to make himself look better at the expense of anyone else, I hope he always remains so

Brother Tobias - sometimes you just have to accept what you can't always understand.

Shirley - if you had a son, he'd be just as fabulous as your girls

That girl - oh yes, he's a funny guy, but he does have a really lovely nature too

TF - as with them all, they are my proudest achievements, and who ever gets him, really will be lucky

He's beautiful! I guess you already know that.