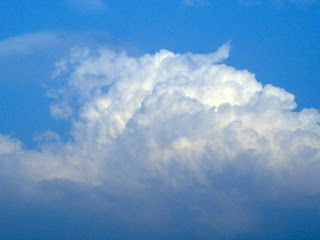 Nice photo, isn't it ? It was taken by NB my gig buddy at the Coldplay tour finale yesterday . Himself, The Boy (his son), Eldest Beautiful Daughter and I went to Wembley to see Coldplay.

We had to arrive early as we all wanted to see White Lies and they were the first band on, they were fab and we all agreed that we would have happily paid the £40 ticket price for their 40 minute set.

Next up were Girls Aloud and I had no notion that a band could be so truly dreadful, we lasted 1 and a half songs before leaving our seats in search of sanctuary, well sanctuary and chips. They sounded atrocious, the ginger one had forgotten to take her rollers out and as EBD said even their dancing was out of tune.

We could not be enticed back in by Jay Z who I'm sure was grand if you like that sort of thing or should I say ting or am I taking that too far ?

Well, I'll be the first to admit it that I'm not a massive Coldplay fan, I can see why people like them and all that but I've never bought any of their stuff. They put on a very good show. Here's my likey and no likey bit...

The fireworks and lit up world balloony type things around the stadium (I know, NME are gutted I don't write for them)

The fact that Mr Paltrow forgot some words and lost his place a few times also the few bum piano notes.

The atmosphere and the company I was in.

Their drummer was very good, I hadn't appreciated that before.

There was very little musical wanking (Turin Brakes did a ferocious amount of that last week) this is always good in my opinion.

Coldplay were on stage for just short of 2 hours.

The X factor bit, Simon Cowell spliced in on a big screen saying we were fabulous, Mr Paltrow and his 70,000 strong choir auditioning for the X factor was just a wee bit silly for me.

Their Billie Jean rendition but I didn't like the original either.

You couldn't buy chips on their own, c'mon.

So by musical maths it was a good gig as I had more me likeys than me no likeys.
Posted by auntiegwen at 17:12

When the likey count exceeds the no likey count, then one is forced to assume that it was indeed a good time. But not being able to buy chips on their own - a travesty.

Madame - indeed, NB had to buy us chicken and chips and eat the chicken, what a guy !

I think NME is missing itself a ligging journalist! (p.s. whisper it, I don't like Coldplay's earnest muzaak much either, Lady Gwennie!) Mwah - Big kiss and good luck for all your QA shenanigans - You are better than you think you are, ma cherie - Get on with it, and don't worry so much x

still sounds like a fun day - see you in a few sleeps!

Yet there you were to see Cold play. :O)

Lolly - not a Coldplay fan ? another one ? Can 70,000 people be wrong ? there was an awful lot of happy people there

Aw c'mon it got you out the house didn't it?! I quite like Coldplay but wouldn't rush off to a concert to see them. The new Wembley is great but agree about paying four quid a pint - a bloody hostage to fortune! It's nowt short of legalised mugging. Still, we took our own sarnies so yah boo!

Yes NME needs you, send in your portfolio now!

Me's glad there were a lot of likey bits. My wee sis met Chris Martin years ago and told him his songs brought out feelings she'd never felt before - namely fear and suicide. He just went off in the huff - probably to draw on his hands.

And drummer's NEVER get the respect they deserve stuck away in the background. They are usually very handsome, too!

Mobs - if NB didn't take me places I'd never get oot !!! god bliss im we took sarnies as well and a chocolate muffin but the boy sat on it and it looked too weird to eat !!

Re drummers - I know, je adore the drummer in The Signals, tres tres gorgeous but will Neil introduce me, nope, calls himself a friend pah !!!

The things You do for a shag!

Well, I like Coldplay! It's the piano...
Anyway, don't know if you 'do' memes but I have tagged you at mine. Even if you don't want to display the award (you must have loads already?) it can't hurt to say, "I love your blog"!
Rx

Katie - yep indeed fourpoundsafeckinpint could be heard more than once that night!

Soxy - play nice, Coldplay were much better than I expected them to be

Rachel - thank you my dear, I don't mind being tagged at all, I always do mine and thank you for the award, I will put it up when I stop procrastinating, I'm good at that :)xx