In which I am disconcerted, twice 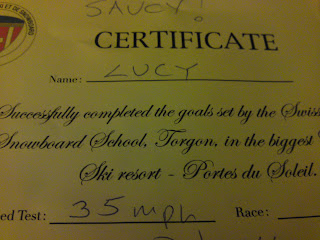 My Beautiful Baby Daughter has returned home from her ski trip to Switzerland full of tales of her exploits. She was extremely proud of her certificate and twas proffered to me for perusal.

I was more than a little disconcerted when I read the adjective they'd chosen to describe her, a mother never wants her daughter to be thought of as saucy, especially not her 13 year old one. Now, the BBD is not a flighty or even flirty child, if I was choosing words to describe her I would use something like sensible or strident or forthright, her unkind siblings would choose bossy. So I was more than a little surprised to read saucy. On querying this I was reassured it was because she had spilled ketchup all down her cream pashmina, actually MY cream CASHMERE, VERY FECKIN EXPENSIVE, IN CAPITALS FOR EMPHASIS, pashmina which had gone on a wee jolly to Switzerland. Bet it wished it'd stayed at home in it's special wee sleeping bag with me now, that'll learn it, swanning off and getting ruined.

Reading further down, I was again, more than a little disconcerted to read that my 13 year old baby, who has never been on a mountain before, my teeny tiny baby girl who 3 days previously hadn't set eyes on a set of ski's in real life had won the speed test, clocking up a speed of 35 miles per hour. This rendered me momentarily speechless, and that takes some doing. My child, who is a human child, a regular human, managed to go faster than I drive most days. This is neither natural nor desirable.

Fortunately I remained in mummy denial land until she was safely home with her full complement of unbroken limbs and a fully functioning brain. Yes, I know, even after nigh on 18 years of parenting, I remain a horribly over protective mummy.
Posted by auntiegwen at 18:54

We can't help it....it's the way we were made....just love em...even when they do give you the vapours with their exploits.......
as for the pashmina? Ketchup?? have you seen what ketchup and tomato soup can do to a tea towel..never mind the inside of a child..or a (previously) gorgeous pashmina? is she repentant? or if you're like me you don't care just because she is home safe and sound...and well done speedy miss!

Hope your pashmina might be able to be rescued

Not From Lapland said...

35 miles per hour?! It's a frightening thought. glad she's back safe and sound. Shame the same cant be said for the pashmina.

So glad she's home again, safe & all in one piece. Poor pashmina. I have to wonder - did it take off on this trip without your knowledge?

MMM - yep, the pashmina could be replaced but not the baby daughter, but 35mph that's too fast for a small child

Heather - she was quite excited about how fast she was, I'm trying not to retrospectively worry about her brother who did that trip 3 times but did boarding rather than skiing ! he is quite, quite silly

Gigi - things that belong to me always seem to leave without my knowledge, that's the joy of having 2 daughters I suppose!

borax, lemon juice, white vinegar and washing up liquid are all profered as possible solutions and if they don't work on you or your daughter you could give up trying to fix the saucy speed fest over protective traits and clean the pashmina!

Any child that takes a pashmina on a school skiing trip is probably light years away from the kind of 'saucy' label that would worry you.

I mean; they're hardly sex and drugs and rock and roll, pashminas....

kellogsville - thanks for the tips, I'll have a go! to be honest, I have had it for years, maybe more than a decade!

and Matthew remember I am a very middle aged woman who finds big soft scarfs very comforting in the winter, do you remember British winter, there is no sun and even your bones and eyelashes feel cold, please bring me to Australia to live with you, please

A colleague of mine, with two teenage girls, has advised me that when my daughter becomes a teenager, it is better not to know everything they get up to!

During my mate's hen weekend in Edinburgh, she borrowed a pashmina from a very posh friend (posh as in has a live-in nanny for her twins kind of posh). Several hours and several pints of flaming sambucca later, my mate was squatting by someone's wheelie bin for a quick piddle on the way home (look, I never said it was a high class do) when the posh bird suddenly wailed, "Stop! You're weeing ON MY PASHMINA!!!!!"

I thought this might cheer you up, although I don't know which is worse, wee or ketchup (on a pashmina, that is. Ketchup is better on chips).