Things that have bemused my family this week 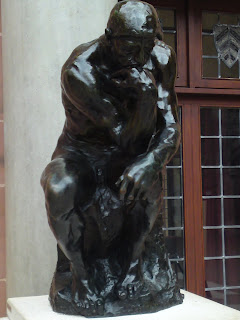 I went to The Burrell Collection, which is a great museum in Glasgow with my Gadget Mad Dad and TBS. I was very confused to see "The Thinker" by Auguste Rodin as I'd seen it the week previously in The Musee Rodin in Paris. 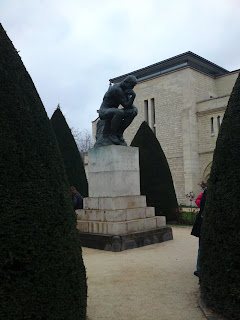 Out shopping in Glasgow BBD asked me if I knew the sales assistant who'd been chatting to us as she's serving us. My kids who've spent 10 years in England are still surprised that people talk to people they don't know when they don't have to.

On a scale of 1 to 10 how bad is it that I like playing with this? If it's around I can't help myself. The Beautiful Son's mate brought it back from Portugal as a present. It got a bit dirty the other day and TBS left it in the shower to be washed, it did surprise the Beautiful Baby Daughter somewhat. I was hailed with "Mummy there is a fake bosom in the shower" 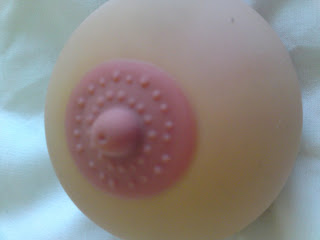 Eldest Beautiful Daughter went to a party and at this party she met a girl who introduced herself thus..."Hi, I'm Siobahn but everybody calls me Shed" so EBD says "Hi, I'm Lara, everybody calls me Tent" She has no idea why she said it but she was called Tent for the rest of that night. I have a theory that cider plus the smart arse gene she inherited from me might be it.

After the same party EBD has a very large graze on her shoulder and it appears an inability to use doors when she's in her cups. After failing to open the front door, she assumed that we'd left keys in the back of the door (we hadn't), she tried the back door which did have keys in, and finally the conservatory where she managed to get in. She then couldn't open the door to the dining room to get into the main house and so went for a wee nap on the conservatory sofa. Which is where I found her an hour later when I got up. I put her back to bed (still drunk) and en route she was very puzzled by the front door and it's faulty lock. She doesn't remember my involvement in this at all.

Hot Boy and his band have just returned from a 5 night tour of Germany where they sold out 500 and 600 seat venues every night. They sold out of T shirts and CD's every night too. Their last gig in Nottingham sold 30 tickets and a CD.
Posted by auntiegwen at 08:50

Sorry to barge in on your comments - just wanted to let you know that your blog has been nominated in the 2010 MAD Awards, as Funniest MAD Blog, while you're nominated as MAD Blogger of the Year.

You can find out more about the awards and prizes and download a badge to encourage your readers to vote for you at our website www.the-mads.com or get in touch if you have any questions.

Thanks and good luck!

Sorry to barge in on your comments - just wanted to let you know that I couldn't be bothered to type the first part of this comment, so decided to copy and paste the one above. :)

HA! So she didn't remember a thing? LOL! That is funny! Kids!! Sigh!
And the boob in the shower is priceless...!!!
Hugs
SueAnn

I'm not at all sorry to barge into your comments!!!!

I was wondering what this tells us about German music taste versus those of Nottingham. This could swing either way!!!

I'm also jolly interested to know how they moved that statue so quickly and why the other girl was called Shed?

Honestly a blog that just leaves these deep questions unanswered really doesn't deserve any such nomination ;0)

Sally - thank you but my deep Scottish "I'm not worthy" complex means that I can't even display awards people give me on my blog and whilst I am uber grateful to the person who liked auntiegwensdiary enough to nominate me and I genuinely am touched by that, there is absolutely no way I could encourage people to vote for me, me doing the vote for me bit is as unlikely as Scotland doing the grand slam, although I'd like ir muchly :)

Matthew - call yourself a mate, where's the blog love?

Sue Ann - not a bit does she remember, worrying isn't it? xx

K - Hot Boy's band sound like 80's pop and apparently German's like tha, they were seen at an unsigned showcase last year and actually got a record deal, they were also approached by a German promoter who thought they'd be popular and he arranged lots of publicity and it worked, they're going back after they play Summer Sundae in August.

Apparently there are several versions of Rodins The Thinker and I have seen 2, in a week, this makes me feel quite cultural now.

I hope this clears it all up for you and you now feel the blog is worthy :) xx

Great Blog and post! Following now and will be back soon! ~ Coreen

V - cheers me dear, what a very cool blog name, loving it x

Style At Every Age said...

There is always a pissed teenager in this house! That Uni girl who just had her op, broke her collarbone whilst pissed 3 weeks before starting Uni last Sept, got drunk and fell off her Kurt Geigers!

The ewww factor on the fake bosom has to be at least an 8. A wee bit deprived, are we? ;-)

Mrs fab - to be fair, there are lessy classy shoes to fall off ;)

Shirley - what him or me ? It is strangely addicitve to play with tho

ok I'm going to ask a possibly daft question, but the fake boob thing what actually is it?

p.s I'd vote for you AG, you wouldn't even have to ask.

love the fake boob. You should see my collection. Congrats on your nomination

Lolly - the fake boob thing is meant to be a stress ball, it's soft and squidgy and I can't stop squeezing it, shocking isn't it? and thanks for saying you'd vote for me,I'm just pleased people keep reading and commenting :)

Mrs W - I am now in awe, how do you get your work done if you have a selection to play with ???? and thanks for the congrats, not mine to take really, someone else was a kind soul to me, I just log on and spout off !

Hi, I'm Steve but they call me Candle. What on earth made her say 'Tent?' I'm going to try this out at the next party where I'm introduced to someone I don't really know - all suggestions as to appropriate names (or inappropriate names if I've had enough to drink) from inanimate objects to...
XX

RLS - please say you're called Aloysius McGlumpher, I love that name, or Elvis Brown, I like that one too :) xx

HELLO MS ******* i dont think im allowed to say your name. I thought i might give this malarky a go.