Beautiful not such a baby anymore daughter

My Beautiful Baby Daughter aged 14 and 3/4's has left middle school. She will join her brother at our 14-19 college in September. I did have a bump of my gums a whiley ago about the idea of a prom, and how much money said prom had cost me. Did I tell you about the £6.50 per head after party as well? My eyebrows are only just coming back down again.

Anyhoo, this is she 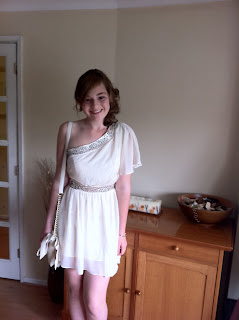 So, the baby has gone, she is growing up. Because I see her every day I get surprised when I see her looking like that, in my head she's still like this

The Beautiful Baby Daughter asked me if I had been invited to the end of term assembly, if your child is getting an award you get asked in to see them. I had to say no but reassured her that neither of her siblings got an award in the 8 years they had been there either, I did the it's all about doing your best and being a good person that counts. She is the only one of my children to be motivated by grades or certificates or awards, validation from other people matters to her in a way it is completely irrelevant to the other 2. Mind you, she is the only 1 of my children who is likely to get any kind of award, unless there is an award for lazy arse of the year, which her brother would scoop annually.

When she returned teary eyed after her last day, she presented me with not 1 but 2 awards, outstanding achievement in art and also pupil of the year.

In BBD's class there is another child with the same initials and the same surname, another L.A MacScottishname. We were amazed to find that out, our name is not the most common Scottish one even in Scotland but in middle England, tres bizarre. So the other Mrs MacScottishname got 2 letters inviting her and I got none.

I'm not going to moan and mump, I wish I could have been there to scream and cheer for her, it's not easy finding your place when your siblings are larger than life characters, I tell her every day, it doesn't matter what they've done, we love you just for being you.

But I'm glad that someone else thinks she's great, because she is, simply amazing.
Posted by auntiegwen at 09:48

She is beautiful for sure!! And congrats to her on her well deserved awards.
Sorry they messed up and you couldn't be there. That sucks
Hugs
SueAnn

SueAnn - in the greater scheme of things it's grand, all my kids are healthy and happy and we have enough to get by, that'll do :) xx

May there be many more award ceremonies in the years ahead to celebrate your fabulous daughter. You do each other proud.
Congratulations!

I remember one year my school messed up the marking of one of my end of year exams: once corrected I was then up for a prize....a day after the prizegiving. It was a bit of a bugger but I was fortunate other years to make up for it.

She's gorgeous as well as brilliant! It's amazing how quickly they grow up.

LCm - I just want her to feel happy in her own skin, it seems to be harder for her.

Trish - yep the proms are big in the midlands aren't they, bloomin expensive

Big well done hugs to BBD...beautiful and talented; see you're not such a mother fail as you think!! x

What a beautiful girl/woman she is, and congrats on the awards! Hopefully we all feel validation from our families and know that to them we're special, but it's still nice to get that from the outside world too!
An art award! To me that's one of the best ones for it shows creativity and imagination.

What a beautiful girl/woman she is, and congrats on the awards! Hopefully we all feel validation from our families and know that to them we're special, but it's still nice to get that from the outside world too!
An art award! To me that's one of the best ones for it shows creativity and imagination.

She's lovely. It sounds like she will do really well for herself too. I think the younger ones always feel that they have to live up to the achievements of their elder siblings, what ever they may have been. I have had to spend a lot of time reassuring my younger that all I want is for her to do her best.

Aah, she's a real beauty! But what a bugger that you had to miss her big moment:-(

what is it with this whole prom thing, I'm dreading it. Well done to her and I'm sure the male race will also be proud that lazy arse son is managing to perform where it matters: in annoying all girlfriends/wives.

Awww she's a bonny quine for sure. And well done to her for getting those awards, shame you missed out on being there to see her but no doubt you'd have been all misty eyed and possibly embarrassing - I know I would ;)

Ahh, what a pretty girl, almost woman. Yes where does that time go, was just looking at my baby after a week of hardly seeing her, (she was dancing in two shows a day, then socialising) and I realised she had changed just a little. She will be 21 in November.....sigh, it just means I am that much older.
Congrats on the awards, 'good on ya school'x Sandi

That is brilliant and oh no what a shame you weren't there to wallow in her glory - oh well - they're bloody boring those things anyway. Lx

She looks great....what a bugger about the missed invitation....but she knows you think she is wonderful....pupil of the year huh? greatstuff!

It's happened here - we had the first name surname problem too, with just an O' missing! Even caused mix ups in medical records. Delighted that your beautiful BBD got the awards and sorry you missed it xx

She's a stunner for sure. What a shame you missed her moment. Mind you, I had to go to The Boy's today and nearly lost the will to live half way through!

Beautiful photograph, you must be immensely proud. Many congratulations on her awards, something to take with her throughout life.

NB - oh we all know I am really

M&J - yep I love her creativity, not something I posess but I always admire so much in others

A - it's difficult to stop them comparing themselves isn't it?

CQ - ah well, these things happen,
I might get to see her another time

S - the bloody prom thing demented (and bankrupted me!!!) her friend was taken in an open top Aston Martin!!!!!!!! she in my car, I emptied the crap out the back seat first though, I have some care

Taz - or whoop whooping and making a holy show of myself

Libs - I know, one of my weans, unbeleivable :)

LFBS - ooh medical records, now that is a worry

WG - so Lulu at family affairs tells me, I've never had to go as the other 2 are award standard challenged

CJ - I'm just glad they're happy. My main aim was to get them to uni with no pregnancies, fillings or asbos. 1 down 2 to go, and I expect Jack will manage to stay unpregnant, I'm on the home stretch
:)

your post brought a tear to my eye, tell her well not evry day. but tell her she is great often.

Anon - thank you, I do, I tell them all, they are well loved