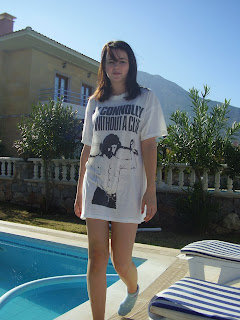 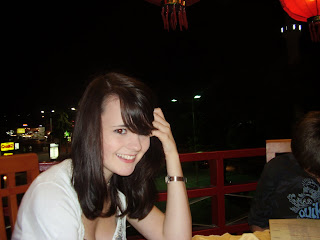 Just in case you're new here, I thought I would start off the New Year introducing you to the cast of players who make up auntiegwens house of fun. I'm going to get someone to do mine so you get a truthful account.

A gorgeous mixture of part adult part baby, she'll be 17 in March, her mental age is somewhere around 4, I'll spring for driving lessons when she's managed to walk around Topshop without skipping, clapping her hands and making oooh noises when she sees something she likes. Commonly known as decorative not functional.

Is brighter than most people believe, is often described as "ditsy" but can occasionally engage brain.

Has a crew of matey boys who adore her beyond reason, will have mad mental crushes on people for about 2 weeks, they will fall madly in love with her, about 17 minutes after that happens she is bored to death of them. She has actually stopped dating people now as she has bored herself with this behaviour. She has willpower. Tremendous willpower.

Is overly fond of the "would you still love me if I was..." game, recently included fat, a nun, a frog, a vampire and lastly had a face like a hippo.

Has no real clue what she wants to be, thought about doing a drama degree at Glasgow Royal College of Music and Drama (at no point did I complain or even raise eyebrow at the thought of me shelling out £18,000 for her to be the corpse in Taggart) then thought of doing a degree in Psychiatric Nursing (again, I didn't even question her on the problem of her being mistaken for the patient) I would lay money on it that she'll end up a teacher. She has about a year to decide, oh feck now I'm scared.

Sleeps a lot, usually at the wrong time of day, truly is not a morning person, see the top photo, sleeps in boys boxer shorts from Topman and a very ancient old Billy Connolly T shirt that I used to sleep in ! Is a veggie like me, no meat, fish, eggs or poultry, would happily live on tinned spaghetti hoops and tinned sweetcorn and drinks builders tea with 2 sugars. Will appear drunk if given a family size bag of Skittles and can only have about 2 alcoholic drinks before falling over. 2 weeks ago woke me up by loudly bouncing off the walls and saying " Shush, shush, you'll wake Mummy" I went out to see who she'd brought home and found she was shushing herself, out of her head on 2 alcopops and stone mad to boot.

Has a very bad shoe habit, streemly fond of Mary Janes, esp double strapped, but has a problem with toe cleavage, she cannot bear her feet and will always cover them up, will make everyone in the house cover their feet and God help them if the accidently touch her with their feet, it is a very bad thing to do. Holidays are a nightmare, esp on the beach !

Is currently obsessed with Twilight, books and film. Loves her laptop more than most people love their children, has her mobile phone spot welded to her and spends a disproportionate ammount of time on Myspace but is less keen on facebook. Loves music and going to gigs, has fairly eclectic taste, has seen My Chemical Romance, Lost Prophets, The Killers and Bloc Party, Glasvegas and White Lies. Music has to be very loud. She has 2 ipod nano's and 1 is supposed to live in the kitchen in a dock thingy, it is never there, why does she need 2 ??????

Is spookily and scarily like me, in looks, in temperament, in mannerisms, in sayings. She is taller, slimmer and has significantly less grey hair and wrinkles but she is truly her Mother's daughter.

Has been since the day she was born a beautiful child, this is hard to believe when you see the truly appalingly messy room her vision of lovliness emerges from, she is great fun and I am extremely grateful she still is happy to spend time with me, go away for weekends with me, and most importantly talk to me, I hope that never changes.
Posted by auntiegwen at 07:01

'A nun, a frog, a vampire and a hippo' sounds like the cast list for some dire West End musical - you know, the kind Andrew Lloyd-Rubber will audition for on telly. Don't let EBD participate at any cost! Lovely post.

You could have just been describing the temperament of my youngest. Spooky!

What a fantastically witty and heartwafrming account of the EBD. You had me grinning away at such a lovely descripion of her. Oh you are sooo very lucky to have her and your other two.

Happy new year hen! X Can' wait to see how they describe you - heavily edited of course before publication!

You know how much trouble you're going to get yourself into with this series don't you?

Oh, you made me laugh so much with the thoughts of you paying out all those drama tuition fees for your truly EBD to play the corpse in Taggart - Wonderful stuff, and something we all wonder about with our weans, I think - What will become of them in the future - Will they ever be able to keep us in the manner to which I could become accustomed?

I have a male child of the same age as yours, and probably the same temperament, viz bedroom and tidying inclination.

I found a New Year's text message on his 'phone, yes, I'm that kind of sneaky mother, from an Aleena(from Hertfordshire, apparently) , saying '2009 is the year when we're finally going to meet, yay! Love you!'

Now, the fact that Grizzler (Number 1 Son) has been seeing The Preacher's Daughter (Alicia, not Aleena) for around a year seems to phase him not one jot...

In a rare moment of lucidity, for unlike your beautiful EBD, he would rather argue the toss with me than speak to me - ever - I asked him what Alicia would make of Aleena (yes, I know they're really too young to be going steady, but what can I do, they seem sensible enough?!), he pondered and then thought maybe she wouldn't like it him having a reserve 'Away Fixture' girlfriend after all...

Sometimes, nay often, I despair, but lovely and funny writing like your blog keeps me from being committed - just yet!

Lovely pieces of work -- your daughter, and your blog. The first chapter of your book, perhaps?

Aww she is gorgeous!! Please tell her that I absolutely understand the foot thing - she has my sympathy. Ewwwwww feet!!!
I do hope that Miss P grows up still liking me :o)

A Confused Take That Fan said...

Oh Auntie. Bought a tear to my eye. So beautiful. Hope I have that kind of relationship with my EBD. Award over for you at mine - even though you are useless with the things!

Your daughter is beautiful - and what fantastic hair! Oh, how I'd love to have straight, shiny, uncomplicated hair like that...

You are lucky to have such a lovely daughter! She reminds me to a certain extent, of my eldest son's girlfriend, who is very girly, often appears 'ditsy', but can also be remarkably shrewd.

What a good idea, to introduce us to your family. Very interesting! I hope that you will allow all of your offspring to tell us a little about you. ;0)

Tim - maybe we should hit delete just incase we give him ideas !

Lisa - well, we have so much in common, not surprising it rubs off on the girls

Mobs - I won't edit it, you can have the Directors cut version, it'll be full of how I don't let them have gum or pets etc etc

Nb - oh yes, I'm hoping to use it as a bargaining tool/threat for the future

AWONI - welcome, ah yes watch out for that Aleena of Hampshire, she's up to no good ! Great to meet another parent of a teen, pure Hell somedays, isn't it ?

Shirley - yes, my finest work is my children although she was my practice child !!! I couldn't write a book, I can hardly write a blog, all that spelling and grammar !!!

Penelope - you're now the 3rd person I know who doesn't like feet, maybe it's not so uncommon after all ? I know that Miss P will always love you x

Katie - she does have beautiful hair, lucky girl, doesn't like it herself, wants curly hair, we're never happy are we ?

MM - ditsy is a fairly polite term for her but as I've said earlier, she was the practice child. How my babies are going to love letting rip on me !

Edge - be very glad I'm so bad at technology, I found some photos of you circa 1991 in a very colourful waistcoat and if I could use a scanner I could blog them !

she sounds darling - like her mother! i have a weird foot thing too.....

WM - she is truly a delight, very very rarely do we have a cross word and when I have to be the Mummy and say no, she always accepts it, now BBD, that's another story !!!!