Is it just me who thinks that if something nice happens it will inevitable be followed by something not so nice just to redress the balance? I have just had a wee jolliday to the Algarve, I had days of sun lolling around here... 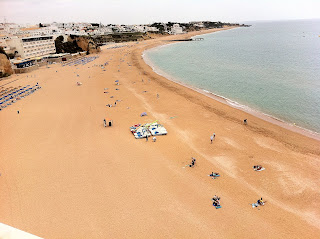 And evenings eating and drinking around here... 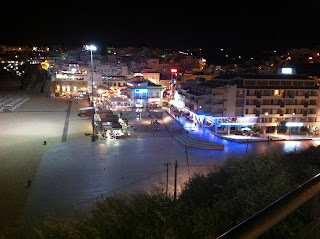 And for my penance?

Just as I'm enjoying the last bit of sun I get a text from Beautiful Baby Daughter which reads "It's not a matter of life and death but what time are you getting back as we need to tidy up?" So I immediately think Jesus it must be horrendous if they're thinking they need to tidy, they could quite happily live in a skip normally.

When I was on the plane a text arrived saying "if you want coffee you may want to buy milk" I left 12 pints on Tuesday as I went to Waitrose just before I left. The mahoosive shop I did before I left had been eaten so as soon as I'm home back to Waitrose I go.

The washing basket which was empty when I left had been filled up and had a pile just as high beside it left for me, the washing machine had also had a nice break just like me and the nice days of sunshine which would have dried the washing a treat were a mere memory as yesterday it rained biblically because I had 3 machine loads to do and dry. And iron.

The dishwasher has packed up, it won't drain gawdonlyknows what they've put in it while I've been away.

My lifesize cardboard cutout of David Tennant was missing when I got back, I later found him in the wardrobe. Since then he has been found right outside The Beautiful Son's bedroom door, in my bed and this morning was last seen in the children's shower cubicle. What can I say? this passes for entertainment in my house.

Remind me again, who had a break?
Posted by auntiegwen at 08:52

Suggest you retreat to your White Co. bedroom with drink and chocs, lock the door and refuse to come out before washing is done and put out to dry, 'fridge is restocked, dirty plates washed by hand (remember that?) and a meal is on the table for you. Oh, and they can wash up afterwards! Dream on ...

Oh dear!! I came home from a holiday with similar results. I never did find out the whole story. But I had a major food restocking to do and I never did find my brand new bedspread!! Yikes!!
Enjoy the rest of your "break"!!
Hugs
SueAnn

Doesn't seem fair, does it? You take a break to get refreshed and relaxed. And it works....until you get home.

This sounds so familiar! The Boy was left home alone for the first time a few weeks ago. He wasn't actually supposed to be home alone but for one reason and another, that's how it ended up. He asked if he could have a few people round, no more than 7. The house was pretty tidy when I got back but on top of my own, I've been left with a pile of other people's washing. I have a fine array of teenager boys underpants and one roque ladies sandal. You always know there's trouble if the conversation starts with 'You know that XYZ you have, well is it valuable?'.

Only one thing for it - book another holiday.

PS - Whoever put David Tenant in your bed should be ashamed of themselves. Everyone knows he's a married man now, I advise a super injuction ASAP.

Life is all about balance, yin and yang and all that malarkey. So it stands to reason you can't have a nice holiday without a corresponding kick in the ribs!;-)

Suggest you retreat back to jollidayland

Such is life. I had a lovely day on Saturday where I thought how lucky I am, followed by a car crash yesterday! (No one hurt, but bank balance will be sore if they write-off our car)

Re: previous somewhat rash offer to adopt your children.

Re: previous somewhat rash offer to adopt your children.

I can remember those days...when my kids did bugger all. They get a huge shock when they flee the nest you know..and then they finally appreciate you...when it's too late to be of any use.

personally I would have dumped the washing in their bedrooms and sent them to the shops. You are not their housemaid and it's time they learnt - want me to come and be demon-mummy for a few days so they appreciate you?!!

Do you think we made rods for our own backs?...maybe so...I've just washed Uni girls 'post festival' clothes ..... but at your end at least the house was still standing and no one was in hospital or prison...x

Perhaps I don't need a holiday after all ...

Oh Parallel lives again. I have just come back from a week in Canaries without children and came home to something similar. What I want to know if I went with Hot Date who did you go with?

Oh dear, time to bring out the big guns and start making them do some stuff to help out. Yeah like I even know how you get them to do that :/
Hope you had a nice holiday anyway xx

I know - 6 months away from blogging and all I can come up with is THAT. You have every right to be disappointed.

Wouldn't it be easier, cheaper and a lot less work to put the Beautiful Children in kennel next time you go away?

Hugs and kisses from Kitty xx

P.S. I bet you had some lovely sun, regardless of the mosh pit you came back to. :)

Last year, son and heir came home a week earlier than us from holiday and was obviously hoping to turn Crap Cottage into Party Central before we came home. He had overlooked the fact that we were having some decorating done in our absence and all the furniture was piled up in the middle of every room. Lol..he was unimpressed to say the least!

You should totally start a flickr site with all the places you find the cutout! It may become an internet hit :O)

Just as well sometimes we don't know what goes on :) Good to hear you had a wonderful holiday tho'
x Sandi

I have been doing all the housework, washing,ironing and cooking after my ex left, I think I was trying to compensate for his absence. Mind you who am I kidding, he did bugger all when he was here! Sorry you came back to a mess and a food free house, makes for an expensive holiday. I only have the one to feed, you have three of the blighters, four if you count Hot Boy!

It's a mummy's life! Hope hol was great - you wouldn't part with them really !!!!

TR - oooh that sounds lovely, a holiday at home, remind me again, when will they leave home?

SueAnn - oh God, mind you if the bedspread was that bad they had to make it disappear probably better you didn't find it :) xx

Gigi - that's it, until you get home, they didn't even let me enjoy the last day of away peace :(

WG - oh no I hate the "was it precious?" conversation and I'm now wondering how the girl got home with only 1 sandal, didn't she notice????

Andy - you and your superinjunctions! I definitely feel everyone should come home and book another holiday the week after, keep your levels topped up :)

Trish - yep my bad Karma again, I must have been really naughty in my last life

WM - oh no, hope it's not too traumatic to sort out, keep fingers and toes crossed

Jon - oh no, no back backers, you made that offer fair and square, they are headed your way, my friend, enjoy

Ayak - that's the worst of it, you train them to be regular functioning humans and then they leave, gah!

S - oh yes please, don't have to be demon mummy, just another mummy, they're getting rather bored of me

Taz - spill then, how do you get them to do stuff without the sound track of whining?

Kitty - I love you, you are the best, kennels, fantastic !!! xxxxxx

CQ - mine wouldn't notice, they'd just partay right around it

Lolly - fab idea, not sure how to get a flicker site, would a technologically challenged auntie be able to do that?

P - oh yes, 4 you can't not include Hot Boy, who actually does cook, and sometimes makes an extra portion for me, like I'm an elderly relative :) xx

Like I said- like I even know how to do that! LOL
I stare open mouthed at friends children who pick up after themselves, do chores more than once and without needing payment.
But we wouldn't swap them for anything would we? Would we? LOL