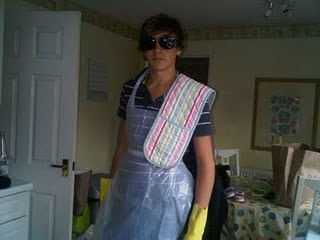 Tomorrow The Beautiful Son will be 16. I love being his Mummy, although he drives me round the bend with...

his omnipresent moaning about how slow our Internet speeds are
his work shy tendencies
his eat anything and worry about ownership later stuff
his ability to wind both his sisters up to cross, shouty, shreikyness
his complete disinterest in revising for any test or exam
his total obsession with stripping down his bike/Call of Duty/youtube/facebook and twitter

He still talks to me.
He still kisses me and hugs me at least once a day.
He makes me howl with laughter in a way no one else can.
He knows when I'm upset when no one else notices.
He said on FaceBook (which makes it official) that I was the person in the whole world he was closest to.

I wouldn't change a thing, he makes me happy and I love him. Jack, a chuisle mo chridhe.
Posted by auntiegwen at 08:24

I have one child...a son...he rocks my world. Glad yours does as well!
My son has five children...they rock my world as well. I am blessed
Hugs
SueAnn

Happy birthday to your handsome son!

And really?? He said that on Facebook? Out loud for the whole world to see? Then, yup, it MUST be true!

The joys of having a son, eh? Is he taller than you? That's always a bit weird. My son has a wicked sense of humour, too, I know because sometimes it's just the two of us laughing and everyone else is straight-faced. Oh well. You are extremely honoured with the facebook comment. I have been forbidden to kiss my son in public since he was 8!

SueAnn - if all of my children go on to have 5 children I will be a very happy nana :) x

AM - he is just shy of 6 ft 2 so nearly a foot taller than me now, he's still quite huggy kissy but he's like that with his friends as well, still nice though :)

Such a fine fella..... a lovely lad with a mother who should be proud! happy birth-day both...x

Libs - not too shabby is he?

Aww Penblwydd Hapus!
I love having such a close relationship with my two so I know how much that swells your heart - it makes up for all the bad stuff we've had to put up with (not with them but in life)

That is just the nicest thing a 16 year old son can say about his mother on Facebook. Am so impressed. A very happy birthday to him xx

Kisses and hugs???
So jealous!

Boys you gotta love em - or hate em sometimes but mainly love the mumping big lumps. Happy birthday to your wee one

Happy Birthday sweet sixteen....you remind me of some-one else I know.....!!

He is very good looking, obviously takes after you then. I have three kids, two boys and a girl. Middle son who is 22 is like that, he is fine tuned to me and has been known to sit and cry with me. He never stopped kissing or hugging me in front of his mates as he grew up. Very special hey!
So a big happy 16 and may the laughter continue.
x Sandi

Ah bless! They're getting towards human at that age aren't they and he is a handsome beastie. Happy birthday to him!

Awwww! That was a lovely post! Happy Birthday Jack!

Fhina - yep I haven't killed him yet, such an achievement for me

LFBS - erm no, I've been quite a grumpy mummy over the weekend, I think I'm not top of his parenting pops at the moment

Ayak - yep somedays he loves me lots, other days when I expect a little bit of effort from him he likes me a whole lot less

Macy - he knows it stops me wanting to kill him, it's his get out of jail free card

CQ - not quite human yet, I live in hope

Jon - thank you, now I have sorted out his presents for this year but as you're going to adopt him, next year you're on your own :)

Lolly - sometimes I can be a nice mummy, I mean 1 nice blog a year should be enough for anyone right?