The Beautiful Son - A Teenager ! 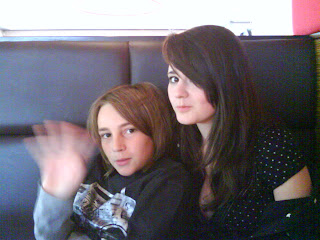 Can you believe that my adorable baby boy has had the audacity to turn into a teenager !! The cheek of him. Tomorrow he will become 13.

He really was the most gorgeous baby, he had a cheeky smile, a really infectious laugh, very blonde hair and had big brown eyes that looked up at me like I was the Queen of the world. Some things have slightly changed over the years, he's much less blonde now and the big brown eyes look down on me now but I have to say he still looks at me with love.

When he was little he had lots of cute sayings and doings, he used to call me Mummydarling, all one word, he genuinely thought that was my name, when asked what he wanted to be when he grew up, he thought for a bit and announced that he thought that being a King would be a good job ! He was very scared of small yappy type dogs, big yappy type dogs and most animals really. When he was a toddler he was a one man demolition machine, he touched and broke everything in his path, it really was just as well he was so lovable.

Today he plays rugby, is fearless, has long hair, plays electric guitar and looks very cool. He has a real integrity to him and is a really popular boy, everyone who meets him loves him.

And he still does, every single day and I count my blessings for the gift of him and the absolute priviledge to be his mummydarling, I am THE luckiest woman in the world, because he's mine and I love him more than I can ever say, he's my heart, mo chridhe.
Posted by auntiegwen at 18:34

Wow. He's gorgeous! You're going to have to start dealing with all those girls coming around, I can tell.

Mother and son relationships are unique. What an absolutely lucky pair you are! And a strikingly handsome young man. With floppy hair, too! I'd give anything for mine to have floppy hair!! It's so cool!

What a wonderful post! Happy birthday to your teenager!

Darn kids! What makes them think they can grow up so fast? haha...Happy Birthday to your beautiful boy!

You have two beautiful children. Lucky you!

That brought a lump to my throat. You sound like a very darling mummy and it's great you continue to be close to your boy. I need tips for my two little shysters!

Mom of Three - he's very popular with the ladies !

Lena - I'm trying not to make him cut his hair, it is pretty cool

Lisa - thanks, I really do want him to stay little