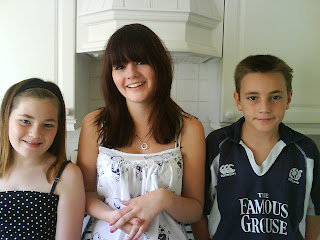 Now, you all know how much I love The Beautiful Children but I have to confess that they rely on me just slightly less than when they were babies. I am at their beck and call 24 hours per day. No matter what I am doing, if they need something, they just interrupt me with a plaintive "Mummeeeeeeee, I need you to...." They will shout from one end of the house to the other for me, I don't respond to shouting so then they will text me or call my mobile asking for grapes to be fed to them or some other such nonsense. No one except me can find any feckin thing in this house. My family lose things a lot.

They think nothing of waking me up to ask me to find something, last Saturday Beautiful Baby Daughter woke me up before 7 to ask me where her majorette stick was. I then had to get up and watch her twirl to some very brain addling pop music for 20 minutes and that was before my coffee. She loves to put on shows for me, sometimes I get them twice daily. No matter what I'm doing, if she needs something she has to come first. Last week I looked after my friends baby and BBD accused me of not paying her and her dancing any attention, I was pushing a baby in a swing !!! She gets very cross if I'm on the phone, she demands to know who I'm talking to and she says things like " you never do anything with me" That's because I'm too busy finishing all the jobs I leave undone as I keep getting interrupted.


Eldest Beautiful Daughter has rang and rang and rang during lessons convincing me that I need to answer the phone as some disaster has surely befallen her only to find she is looking for her skinny jeans. She constantly needs driving places and she says things like "but you want me to be safe, Mummy" and I'm always taking her to buy shoes, that child goes through Converse like you wouldn't believe. I spend a disproportionate amount of time sorting clothes out for her, her laundry load is phenomenal. She has the attention span of a house fly and if there are no matey's around I get the "I'm bored Mummy, entertain me" and she talks nonsense at me till my ears bleed.

The Beautiful Son rings and texts me constantly asking if he's allowed anything else to eat, this is an omnipresent worry for him. He's no sooner finished eating one meal and he's looking for his "afters" or his snack and God help me if I say we're having brunch, he looks at me like I've just kicked a puppy. Amalgamation of meals is something his little brain is unable to comprehend. This boy likes 3 meals per day, 2 with afters and at least 4 snacks. He also has real difficulties in finding things and is getting slightly obsessed with doors being locked (since EBD mad mate came in shouting and TBS locked himself in the loo cos he thought we were being burgled) and he accompanies me round the house at night to ensure it's locked, he also doesn't like to be downstairs on the computer on his own, so I have to sit there till he's finished before I can go to bed. He also likes to be asleep before me. He likes to go to bed at 11, I like to go at 9.30 ( I've got an early morning majorette show) so I am now perpetually knackered.

This is in addition to the 5 courses I teach and all the prep for that, I do all the washing, cooking (ok, heating up), cleaning, shopping, ironing, driving and anything else that needs doing.I could also do a spot of United Nations peace keeping as I am constantly refereeing between them. They often ask me which one I love the most, each child thinks a different one is the favourite. TBS used to ask which one I'd save first if there was a fire ( what goes on in my kid's brains ?) but stopped after EBD said it would be him as he's too stupid to get himself out. God, is it any wonder I've got grey hair ?

ps yesterday I was so feckin demented with their wants I recorded a new voicemail message which I think put my point across quite well, so ring me and have a listen.
Posted by auntiegwen at 10:03

Labels: being a mummy, being tired, photo, The Beautiful Children

Oh my God!! You are living MY LIFE! I too am at the beck and call of two tyrants, work full time and the rest....My own mother never paid me or my siblings a blind bit of attention except at meal times when she actually had to interact with us...benign neglect, but di us no harm. My kids will need to either pay for a full time carer or move into a hotel when they leave home....IF THEY LEAVE!? HELP!!

Anonymous said...
This comment has been removed by the author.
Thursday, July 24, 2008

Would you believe me if I said I miss those moments now that mine are gone? No, 'course you wouldn't! haha..

But seriously sometimes the quiet is more than I can stand and I'd kill to have beautifulbabydaughter asking me to entertain her. Not right, I know.

But they really do leave and it feels like they grow up and go in the blink of a feckin' eye!

That being said, I'll reiterate what I said yesterday sweetie. You have got to take care of your needs and let them deal with some of their own. The reason is two fold.

1) You're going to lose your ever lovin' mind. Duh.
2) They have to learn to look out after their own needs. The best way for them to do that is to see you looking out for yours.

Sounds too me like you are doing the job of being mum a bit too well. I suggest being a bit more "Shamless" and a little less "Butterflies" (showing my age now lol)That should sort the little blighters out :O)

oh my god you have my life, AND my children!!! if it makes you feel any better, YOU ARE NOT ALONE!!! my girls say EXACTLY the same thing. i am so over knowing where EVERY SINGLE THING is in this house! i have major concerns about going to NY in ctober - hubs will be playing it fast and lose with the house rules for sure - that's if he can even keep up with them. not sure how many children i will have left when i get back!!!

Sounds like you need a girls night out! What time do you want me to pick you up for drikies tomorrow night??? Oh & leave the cell phone at home. ;-)

Other than that, All Mighty, thank you for keeping from procreating further.

Sounds like you need to work out some "me" time for yourself and be strict about keeping to it too. Even if it's an hour a week when the beautiful children must leave you alone. You'll love them all the more for giving you that respect and it will be an invaluable lesson for them too. Pop over here for coffee once a week if you like......Flick xx

OMG I'm so glad I've stopped at one, it's bad enough being at her beck and call. You definitely need 'me' time! My mum always told us we couldn't disturb her in the bath, she read a lot of books there!

They can be a bit needy at times eh?

Touched a chord, did it ?

It reached new heights of selfishness last night as I was actually woken up at 11.45 pm to settle a dispute between BBD and TBS as to who should switch the tv and lights off downstairs...

aaargh !!!! You have my sympathy. Enjoy your trip back home sweetie :) TFX