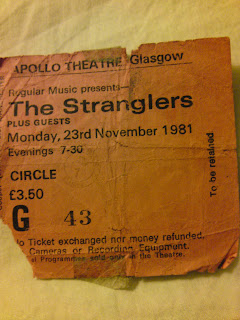 I was given a really lovely "I heart your blog award" from the really lovely Really Rachel Unfortunately I can't show it as it says that my image is corrupt and yes, that is the first time anyone's ever used that phrase about me.

The award comes with a meme of 7 things. There have been 7 things missed about the UK - erm I'm still here, 7 personality traits - well you've heard them all before, everybody knows how weird I am, 7 songs on your ipod and Rachel gave us 7 long lost songs.

So I have to find a 7 for you. Without further ado, may I present my...

The Stranglers - Glasgow Apollo 23rd November 1981 - my first gig and it has to be there because of that. It cost £3.50 and I earned the money from babysitting. I went with my first boyfriend who was called Alan Osprey, nickname Ospur, he was tall, dark hair, blue eyes and looked like Robin Cousins. Oh how I loved him. I wore a black shirt belonging to him, his leather bikers jacket, a black pvc rara skirt, fishnet tights and Dr Martin boots. My hair was severely backcombed and hairsprayed into a Siouxsie spike and I had lashings of black eye liner and also the black lippy and nail polish, yes my mother was very proud. I can't remember who supported them but was overgiddy with delight to be there, Ospur and I had chips afterwards and snogged all the way home on the bus. Bliss.

Simple Minds- Meadowbank 12th August 1989 - my 23rd birthday, I went with a big crowd of friends and as we walked along the London Road from where our flat was in Easter Road, we were passed by Jim Kerr and the band in a black limo as they travelled to the gig after being at the Hibernian ground. I loved Simple Minds and I got lifted onto the shoulders of the aptly named Big Rab (he's 6 foot 7) for a fair bit of it so had a good view. Only time I've ever been able to walk home after a gig, we had a party at our flat afterwards as well.

Runrig- Loch Lomond 22nd June 1991 - a beautiful day in a beautiful setting. Supported by The Big Dish and The Hothouse Flowers and others. Listening to the HF singing "I can see clearly" whilst looking down over the loch with the sun glinting on it is a fantastic memory. And to hear the 50,000 strong crowd join in with "Loch Lomond" for their final song and all the fireworks afterwards was an unmissable experience.

Texas- Nottingham 10th October 2005 - because it's the only time I've ever heard her sing live. She was out of this world, the finest voice of all time. Sad she didn't sing my favourite but her version of the Scissors Sisters "Take your Mama" was the highlight of a set that didn't have a duff note in it. She is unsurpassed.

The Killers- Dublin 21st August 2008 - my very favourite gig of all time. I love this band, the Beautiful Eldest Daughter and I had a fantastic time at Marlay Park, their first song that night was "For Reasons Unknown" which is the song I most identify with, my own personal theme tune and I would have paid all the money it took to get there just to hear that 1 song. They were utterly brilliant. We went back to see them in Belfast 6 months later and if anything the set was better but the atmosphere in Marlay Park couldn't be bettered so this gig wins.

Primal Scream- Nottingham 27th November 2008 - because it's the only gig I have ever missed most of. We arrived during "Rocks" which was the final song but we did get the 4 song encore and that was worth it. I would love to go see them again for the full gig. One of the funniest nights I've had in years.

Manic Street Preachers- Camden 29th May 2009 - fabulous gig, NB and I got really near the front, the band were great - I'd almost forgotten how good they were and how much I liked them, there was a fight right beside me and a drunken Irishman leaped a tube barrier on the way home to tell me I was beautiful. All in a day's work.

So there you have it, my 7 best gigs. Please feel to take the "I love your blog" bling off someones elses non corrupt image and have a go with your 7. You all know your auntie loves you.
Posted by auntiegwen at 18:37

I love that you remember the exact date for all of the gigs.

Hey, I was at that Simple Minds gig!! Travelled down from Orkney for the weekend especially. I take it No.8 is The Finn Cousins...??? xxxx x

I've only seen one out the seven gigs mentioned - and only one out of the seven I'd never see (I'll not say which) but that's fair do's compared to others' gig lists I've visited.

Lolly - some I do, others I had to look at the tickets :)

Edge - you prob know who I was with - included Big Rab as mentioned, Ian Willson, Hammy and Vinny Banks amongst others ! Did I have no friends of my own back then? xxxx x and you know how much fun I had at The Finn Cousins

My best gig was Evan Dando in the tent at Reading in god-knows-when. Maybe 1999? Could be, but maybe not.

Cool that your first gig was the Stranglers.

Great gigs! I love Texas and The Manics too. Thanks for doing the meme :)