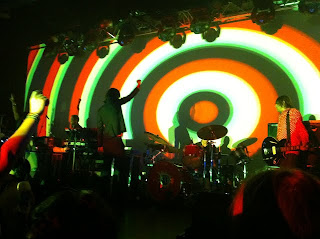 If you've been reading a wee whiley, you may remember an attempted Primal Scream gig. I say attempted, as that night, the band in a very not rock n roll style finished their gig around half past nine.

This is very poor, even by my standards, which consist of jammies on and bed at the earliest possible opportunity.

Anyhoo, take 2 found me at the 02 place in where I do live, which is the arse end of nowhere, middle Engerland.

So, this time I arrived really really early, so early I had to amuse myself by throwing ice cubes down peoples T shirts for fun. I was there an hour and a half before before the band, to be on the safe side, it'd be pants to miss them twice.

So, 20 years on they play Screamadelica in it's entirety. I missed the 90's music completely being up to my arse in weans and nappies, Postman Pat and the wheels on the bus were the soundtrack to my life then. I now realise that Screamadelica is for the stoned, Mani kept the band's end of the bargain up beautifully, sadly I was drinking diet coke, not a euphanism.

The encore was, again, the best part of the gig. But, as always, being with your best mate and live music is an unbeatable combination.
Posted by auntiegwen at 22:29

Unless it's the X Factor tour of course :)

Sounds like you had a rocking good time!!! I could just picture you throwing ice down the shirts. Bet they all appreciated this!! Ha!
Hugs
SueAnn

Did you do sex and drugs or was it only rocknroll?.........or was it more like a laid back groooooooove kinda thing? very very sensible of you to arrive early.....(next time I have one of those little 3 leg stools you can carry over your shoulder if you ever fancy one..........) and whose shirt were you cubing?...
no really...glad you had a grand time xx

WG - a fate worse than death for me

Libs - no drugs, I am a responsible parent ;)

The problem is (for us anyway) if we get to go out to a gig at our time of life, we become wildly overexcited and begin to act like the teenagers we once were!

CQ - oh as did we, we were right at the front, covered in beer and jumping around like we weren't old enough to know better

Amazing how much music sounds better when your're stoned. Still, jumping around helps...is this what the training was for?

LFBS - oh no the training is so I can get back into my jeans (proving rather difficult at present, sadly)