Where did I go wrong?

I have a lovely son, a son that I love and adore, a son I have tried so hard to make into a well rounded human being (okay a regular human)

Sometimes I think I've cracked it, he'll show me a depth of feeling or a sense of empathy and understanding that I am still surprised by, and I will allow myself a proud mummy feeling. I will bask in the glow of maternal pride and think I made him.

Other times not so much.

On Saturday he was telling me about his cunning plan to make money. He is going to find himself an older lady who he will accompany to parties and business functions and he will then sleep with her. For money.

My son, aspiring to be on the game. I am so proud, my friends sons only want to Doctors and lawyers, my son wants to be a gigolo.

He has found a website called sugarmommies which promises to spoil young men and he is so looking forward to being 16 so he can join said site.

Far be it from me to tell him of the flaws in his cunning plan. I am sure that successful business women will be flocking to him, every woman who has climbed the corporate ladder would be dying to have a 6 foot 2 lump of useless who needs washing, dressing and plugging into his Ipod every morning, wouldn't she?

And I'm sure any ones work colleagues would be madly impressed with his urbane chit chat about Facebook, the best laughing babies on youtube and his extensive Call of Duty knowledge. He could whisper sweet nothings in her ear in his best GCSE French. He could wake her up every morning with a cup of coffee before he goes off to do his paper round. Who could fail to be jealous as he turns up on his BMX to collect his lady friend and give her a backy to said business functions with his pants on show to the world. And I'm sure he'd wear his best Jack Wills ones for such a lucky lady.

Flawless plan son, who wouldn't want to date this fine specimen of male? 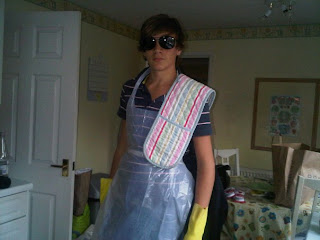 Oh I have one of those too who would be absolutely useless to any woman. I'm ticking off the qualities as I type - the inability to find any item of clothing each morning, the Facebook and poor French conversations. The poor woman would be very lonely in the mornings: my gigolo-in-waiting doesn't get up til noon at weekends. Can she stomach the smell of Lynx chocolate?

Well, you've clearly brought him up to have lots of self-esteem. That's supposed to be a good thing, isn't it?

Maybe his strategy is in the pricing? But he'll be working jolly long hours to make ends meet!!

Well, at least he is looking toward the future and making a plan - that's a positive.

erm. Have you got the address for sugarmommies. Just for research purposes.

Oh bless!He's making a plan - all be it a flawed one. Mine also makes ridiculous statements, usually crime related. I despair

Well, now you mention it I do have a party coming up and no man on my arm.... How much does he charge?

Oh to be young and clueless!

He is clearly a man of exceptional entrepreneurial spirit and insight.

I would advise him to stop messing about with GCSEs and start reading up on Casanova immediately.

Of course there is an outside chance that he might have the last laugh!

I reckon he must have a swathe of girls his age already after him...bet he's beating them off with a stick.....but its always a good idea to have a plan B I guess...

My brother went down this route and ended up being 'kept' in a caravan at the bottom of a lady's garden and summoned to the house now and then to entertain her - he is very knowledgeable about caravans now.

I have no valuable and witty rejoinder to add, as my youngest son is 20 now and still sounds like yours. Oh well!

Hey, in these tough times, I admire his forward thinking (sort of) and you've got to take what you can.

I also want to know if Betty's brother (mentioned further up the comments) has written a book!!

Well, it worked for Dermot Mulroney in "Wedding Date;" why not for TBD?! Tell him to watch that movie (53 times) and learn.

They'd be mad not to have him!

He is truly amazing, and how tall he's getting - Does he sleep with his feet in a growbag on those White Company sheets, BAGgie??! Much love to you, and hope to see you on the other side!

I am really looking forward to the future posts about his stellar career as an international gigolo!

Trish - oh I know the feeling of being the only person in the house that can find things!!!! ditto the Lynx chocolate !!!

LFBS - oh yes not something my children lack, the self esteem thing

S - I would imagine he'd get richer with his paper round

Gigi - indeed, thanks for taking over my Pollyanna mantle :)

NB - would you give yourself peace, your sugarmommy would need to be about 90

SueAnn - he genuinely would sleep with women for money, I can't believe his immoral side

LCM - well tuition fees will be 9 K for him, a boy's got to keep himself in Jack Wills pants I suppose

Mrs W - oh yes useless statements, I hear them a lot too

Nikkii - he thinks it's great, money and sex, his 2 favourite things, I blame the parents ;)

Mac n J - oh I fear he will always be clueless!

Andy - a book? read? clearly you don't have a teenage son yet

Troy - oh God Troy, do you think? surely no grown up woman would really want a 16 year old lad????

Libs - he is hugely popular with his own age group, he's definitely a Hot Boy but that age of girls won't give him money to sleep with them, it's the money that's the real attraction and the free food at the parties and business functions

Betty - I so want to hear about caravan man, please, I know he's your brother but being kept in a caravan is a story I want to hear

AM - I imagine they'll still sound like this for a good few years yet!!!!

Nickie - indeed, he's got a lot of outlays coming up, his BMX needs new tyres, these early morning paper rounds are heavy on tyres!

Mrs Boo - he's just a taller version of Oscar really, the cognitive ability's about the same

Alienne - I had such high hopes for him when he was a little boy, now staying out of jail seems like a win

Oh bless him! I love his confidence!
Wonderful age isn't it?!
My eldest is looking forward to turning 16 for various worrying reasons.....